The audition reading for We’ll Always Have Paris will be on Tuesday, 2nd December in The Little Theatre from 7.00pm.

Anyone interested in being involved in this production should make every effort to attend the readings. Bill Dodds is directing.

There are four female parts:- Nancy, Anna, Raquel and Madame Boussiron plus one male part Charlot.

Denise will be holding a workshop based on First World War Poetry at 7pm on Tuesday 25th November at the Little Theatre.

Some members have already chosen their poem but poems can be chosen on the night.

100 years on and still we remember and honour the First World War heroes.

Bill Dodds will be holding audition readings for the upcoming Patrons Evenings at 7pm on Tuesday 18th November at the Little Theatre.

These evenings provide an opportunity for the Drama Club to thank its Patrons for their support with a free evening of entertainment. This year it will take the form of “An Evening of English Humour and our own Helen Hillcoat”.

The format will be rehearsed readings from the works of English Humourists like Alan Coren, Keith Waterhouse and Joyce Grenfell introduced by Bill Dodds with brief biographical details of the authors and alternating with songs and stories from our own Helen Hillcoat.

It will be an opportunity for newcomers to perform and everyone who wants to take part will be guaranteed a role. It will be a lot of fun. 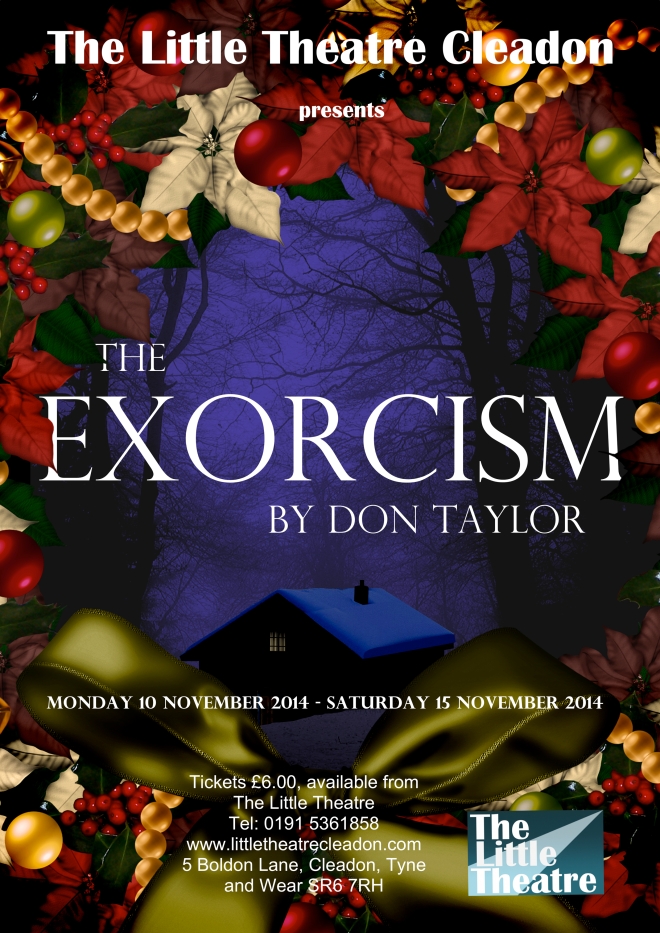 Poster by Road Ahead Media

Here are the Director’s Notes by Frank Ditchburn for this exiting production which runs from 10th to 15th November:-

It is always a pleasure to direct a talented and enthusiastic cast in a well-written and powerful play, and in this production you will see both.

The Exorcism first saw the light of day in 1972 as a 40-minute production in BBC TV’s Dead of Night series. It was subsequently re-worked as a radio play, and finally expanded into the two-act stage presentation you will see at the Little Theatre.

Of our cast, Mark Lamb, John Errington and Sonia McDonnell have all appeared on our stage before and make a welcome return. Helen Irving makes her first appearance, hopefully of many.

Finally, a vote of thanks to John for the set, Dave and Tim for the lights and sound, and to all the unsung heroes who take on backstage and front-of-house duties without which no show would be possible.

Phone 536 1858, but be quick as tickets usually sell out quite quickly.